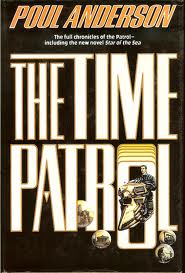 Either space travel or time travel could bring advanced technology directly into contact with primitive paganism. As ever, Poul Anderson gives us both. What would result?

As a warning to the Time Patrol, Exaltationist time criminals bomb a small temple of Tanith in ancient Tyre. The explosion does not surprise the Tyrians:

"'They don't have our kind of Weltanschauung, remember. To them, the world isn't entirely governed by laws of nature; it's capricious, changeable, magical.'
"And they're fundamentally right, aren't they? The chill struck deeper into Everard."
(The Time Patrol, New York, 2006, p. 254)

When Everard wonders how to track his enemies through space and time, his Tyrian guide, Pum, deduces:

Everard thinks, "Am I that transparent to him?" (ibid.)

When Dominic Flandry tells his Starkadian friend, Dragoika, that a spaceship on hyperdrive can overtake light and take pictures of the positions of a moving object at different times in the past, she replies:

"'They can reach over time itself?...To the past and its ghosts? You dare too much, you vaz-Terran. One night the hidden powers will set free their anger on you.'" (Ensign Flandry, London, 1976, p. 200)

"'But what can we do? Our course was set for us ages agone, before ever we left our home world, and there is no turning back.'" (ibid.)

It does not seem out of place to ask, "Set by whom? By what hidden powers?"

Lastly, in Anderson's later novel, Genesis, the presiding post-organic intelligence of a far future Earth not only re-creates extinct human beings but also converses with them as a god in which they would naturally believe in an early stage of social development.

The consistent theme here is that ancient and future world-views meet.

Later: a Law formulated by another sf writer is applicable?
Posted by Paul Shackley at 13:18

I thought the meaning of what Flandry said to Dragoika on "Our course was set for us ages agone, before ever we left our home world, and there is no turning back," was plain. Christianity was just one of the many factors leading to mankind leaving Terra in the Technic History. To explain this point, I'll quote a bit from Section 4 of "Delenda est": "As Whitehead pointed out, the medieval idea of one almighty God was important to the growth of science, by incultating the idea of lawfulness in nature. And Lewis Mumford added that the early monasteries were probably responsible for the mechanical clock--a very basic invention--because of having regular hours for prayer."

Without the kind of science and philosophical mindset which emerged in the West, I don't see much chance of ever getting off Earth in reality.