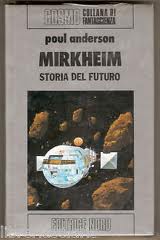 In many of Poul Anderson's novels, there is maybe one chapter or passage of condensed information that defines the theme of the novel. Mirkheim is equally condensed from cover to cover.

Several Merseians of the aristocratic party enlist in the Baburite Space Navy because of their dislike for the Polesotechnic League. Here is the later conflict between the Merseian Roidhunate and the Terran Empire in embryo.

Captain Nadi of the Supermetals Company is yet another Wodenite. Thus, we see at least four members of this species - in the League period, Adzel and Nadi; in the Imperial period, Hugh McCormac's former comrade in arms and Fr Axor.

Babur is sub-Jovian: solid water; seas and rain of liquid ammonia; atmosphere of hydrogen and helium. Yet there is a solid surface with mountains of ice, volcanoes of exploding ice, destructive winds (landing spaceships must be protected in silos), murky colors, low, black-leaved trees and leviathan animals. This is how Jupiter was imagined in earlier sf, including in some earlier works by Anderson.

Falkayn can scarcely differentiate the caterpillar-centaur-lobster-shaped Baburites from their draft animals and wonders whether a Baburite would detect as little difference between a man and a horse. Thus, Anderson conviningly conveys an alien environment and its inhabitants.
Posted by Paul Shackley at 07:56