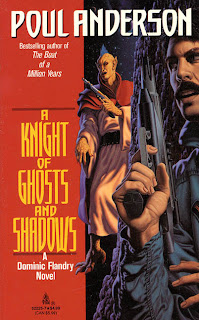 is first mentioned, by a senior Merseian to Flandry, in A Circus Of Hells;
first appears in The Day Of Their Return;
first meets Flandry in "Honorable Enemies";
is first seen on his home planet of Chereion in A Knight Of Ghosts And Shadows.

Defeats
Aycharaych is captured by Flandry but immediately released in a prisoner exchange at the end of "Hunters of the Sky Cave." His usefulness to Merseia, his motivation for working with the Merseians and possibly also his life are ended when Flandry orders the bombardment of Chereion at the end of A Knight Of Ghosts And Shadows. A senior Merseian speculates about Aycharaych's possible return in The Game Of Empire.

Thus, Aycharaych appears in just four works and is referred to in another two. Surprisingly, he and Flandry meet in only three works although they meet twice in two of these.

A Knight Of Ghosts And Shadows ends Aycharaych's conflict with Flandry if not also his life but other questions remain. Why was he the last Chereionite? I think we must accept his claim that his people were that ancient star-faring race that left ruins in many planetary systems but is there any truth behind the myth that these Ancients or Elders went beyond and will return? Some writers would have answered such questions but Anderson's fictitious history resembles real history to the extent that mysteries remain.

Anderson went on to write other speculative fiction in which post-organic intelligence hopes to "go beyond" by using either the energy of particle decay or some even more obscure mechanism to survive the heat death of the universe.
Posted by Paul Shackley at 00:03

Email ThisBlogThis!Share to TwitterShare to FacebookShare to Pinterest
Labels: A Knight Of Ghosts And Shadows, Aycharaych, Dominic Flandry, Poul Anderson