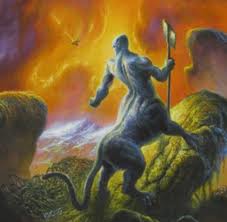 We are bipeds because our ancestors were quadrupeds. If they had been hexapods, we might have been quadrupeds. Could there be intelligent quadrupeds? (Larry Niven imagined intelligent tripeds.)

In Poul Anderson's works, Jovian Joe is a quadruped. Is the Centaurianess a centauroid? I have yet to reread that work to check its contents.

In Anderson's History of Technic Civilization:

every Didonian intelligence is a linkage between three organisms, including one quadruped;

one centauroid Donarrian fights in the Black Nebula, another is among Hugh McCormac's rescue crew and a third fights alongside Flandry in the Sky Cave nebula;

"'You humans are a kittle breed...Together you can show courage that can cross the threshold of madness. Yet when no one else is near to tell your fellows afterward how you died, the spirit crumbles away and you fall down empty.'" (The Rebel Worlds, London, 1973, p. 10)

This recalls a line quoted in other Anderson works:

"This I know that does not die: how dead men's deeds are deemed."

McCormac replied that we began as animals hunting in packs. Here, of course, Anderson moves from considering the Wodenite's outward appearance, "...huge, scaly, tailed, four-legged, saurian-snouted..." (ibid.) to imagining its perception of human beings and thus uses the idea of an alien being to comment on humanity.
Posted by Paul Shackley at 21:30