A Stone In Heaven and Flandry's Legacy 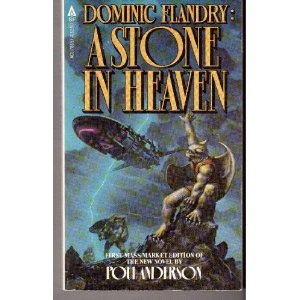 The ACE Books paperback edition of Poul Anderson's A Stone In Heaven has four excellent features:

The Afterword is included in the e-book version of Baen Books Flandry's Legacy but it and the illustrations are omitted from the paperback edition.

In Moroto's illustrations, Flandry, Chives, the Ramnuans, in fact all the characters, exactly correspond to Anderson's descriptions. We see Flandry and Banner as:

These illustrations could form the basis of an animation or graphic adaptation and should definitely be re-included in any future edition of the novel even if it is in an omnibus volume.
Posted by Paul Shackley at 20:00

I don't wholly agree with Sandra Miesel in calling the Empire "parochial," but I think I see her point. Wish we or someone else could bring this blog to her attention!

I agree with your comments about the illustrations for A STONE IN HEAVEN. For once we had an artist who paid ATTENTION to what a writer actually said. The illustrations we have of Flandry, Chives, Miriam Abrams, Emperor Gerhart, etc., actually CONFORM to how Anderson described these persons. My only criticism is thinking there were too many two page illustrations which could have been omitted with no loss.