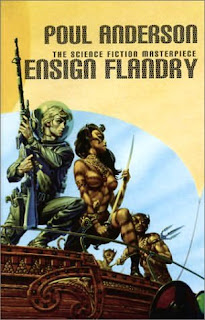 It really had escaped my notice, until a correspondent drew it to my attention, that the John Ridenour who is in Poul Anderson's "Outpost of Empire" had already appeared in his Ensign Flandry. My next projects on this blog are:

(i) to track down whatever had already been revealed about Ridenour before he became a viewpoint character of "Outpost of Empire";

(ii) to recall and summarize the complicated, typically Andersonian, environmental and inter-species politics of "Outpost of Empire."

Freehold, like Avalon, has both human and non-human colonists and successfully resists the Terran Empire, which we usually see winning through the efforts of Dominic Flandry - but he is not in this one.

However, since it is now well past midnight on this part of the globe and since I have both political and familial tasks to perform in the morning, I will regretfully withdraw from oneness with the Technic History universe until some time in the evening or the day after.
Posted by Paul Shackley at 00:18

I would not QUITE say the non City Freeholders "successfully resists the Terran Empire." Rather, the problem was they had not been in the negotiations which led to the Cities (erroneously claiming to speak for the entire planet) being annexed by the Empire. If the non City Freeholders had been part of those negotiations, the Imperial charter formalizing and defining the planet's mode of self gov't and status within the Empire would have been very different.