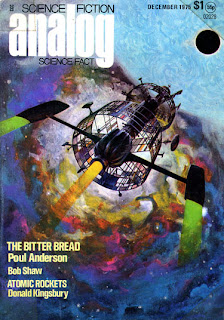 "'The troublemakers, they are those what are not contented with God's gifts of good food, drink, music, women, profit. No, they bring on misery because they must play at being God themselves, they will be our Saviors with a capital ass.'"
-Nicholas van Rijn in Poul Anderson, Mirkheim, London, 1978, p. 102.

I disagree with van Rijn on a few points. Good food, drink, music and profit are not given by God but produced by humanity. Profit is created when commodities, including labour power, are bought and sold at their value. Thus, van Rijn's employees sell their labour power at its value, then produce more than that value.

"No system that mortals devise is perfect; all break their share of lives." (p. 104)

"Troublemakers," so called, are often not those who play God but those who protest when they lose out economically because of decisions taken elsewhere. I participated in a demonstration outside a closed print works. A policeman pushing back a demonstrator said in exasperation, "Why don't you just go home?" to which the demonstrator replied, "I don't want to go home! I want to be in there! I've lost my job, do you know what that means?"

Van Rijn is right that such men can be misled by "Saviors" but, meanwhile, many of the unemployed do not have van Rijn's access to good food, drink or profit. If I saw these things as God's gifts, then I would have to say that God was not handing them out equitably.
Posted by Paul Shackley at 00:08

But why has the printing works closed down? If political factors were not the main reasons, then that firm failed because it was not making enough profits to cover the costs plus a reasonable return to the owners. A business simply CAN'T stay open if it takes in less than what it pays out.

Sean,
I agree. That is how our present economic system works.
Paul.

Sean,
In this case, the employer had secretly planned to move the work elsewhere. It happened overnight with no warning, negotiation, compensation, redeployment etc. But this kind of conflict is part of our present system. I do think that the technological potential for the production of abundance combined with the possibility of an entire population that is literate, educated and informed makes it feasible to work out different ways of doing things in future. Cooperation by members of society, not nominal cooperation forced on us by a bureaucracy.
Paul.

And I agree in some ways. That is, if possible, a failing business should give its employees advance notice of it going out of business. Say, at least a month. That would allow time for an orderly shutdown, including, if funds are available, employees receiving two or three weeks termination pay.