The Thirtieth Century And Later 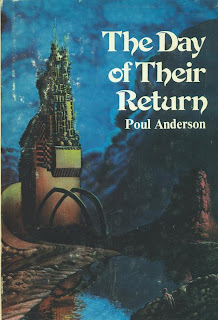 (For convenience, I refer to dates as given in Sandra Miesel's Chronology of Technic Civilization although it may be necessary to revise these dates slightly. In particular, Dominic Flandry might belong in the thirty second century rather than the thirty first.)

In Poul Anderson's History of Technic Civilization, the twenty fifth and the thirty first are the only two centuries in which more than one or two works are set. The thirty first has seven novels and eight shorter works of different lengths, including one that could count as a short novel, set during the lifetime of Dominic Flandry. After that, there are only four works set in widely separated centuries of the further future. Their dates as given in Sandra Miesel's Chronology can only be guesses.

Although van Rijn's century, the twenty fifth, and Flandry's, the thirty first (or thirty second), total thirty one works between them, that still leaves twelve works set in earlier, intermediate or later centuries. Thus, a continuous historical thread links:

the twenty first century to van Rijn;
van Rijn to Flandry;
Flandry to the further future.

A greater story emerges from the many individual stories. The whole is greater than the sum of its parts. Anderson realized this while writing and planned subsequent works accordingly.
Posted by Paul Shackley at 16:15

It was almost by ACCIDENT that Anderson's stories about the Polesotechnic League and the Terran Empire eventually "came together" to form a History of Technic Civilization. In his essay "Concerning Future Histories," Anderson wrote that these two series were at first separate, but he "impulsively" decided that Nicholas van Rijn and Dominic Flandry could have lived in earlier and later periods of the same time line. And mentioned van Rijn as a figure in the past in "A Plague of Masters."