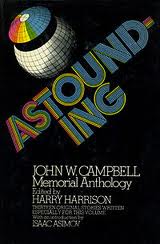 - but another six works, mainly featuring Nicholas van Rijn, are set between the first Falkayn story and the concluding novel. Further, van Rijn, apart from being mentioned in stories in which he does not appear, cameos in "The Trouble Twisters" and is equally on-stage and active in the concluding three works about Falkayn. Thus, Mirkheim is the culmination of both series.

Until Mirkheim, all that we knew about Falkayn was that he was obliged to earn a living because he was a younger son of an aristocratic family on the planet Hermes and therefore wound up leading a trader team for van Rijn. In Mirkheim, David's older brother Michael, Admiral of the Hermetian Space Navy, dies in combat so that David succeeds as head of the family and president of their domain and returns to Hermes.

The gray stone Falkayn manor house, Hornbeck, occupies a plateau on a lower flank of Mount Nivis with forest and snow-covered peaks to the north and west but farm land to the south and east. The domain began in timber and iron, then its enterprises became planetary. Domain lands include a hunting lodge also used by off-duty servants. An independent fisherman, Sam Romney from Longstrands, does most of his business with the Falkayns. David confers with his mother, Athena, who mentions her other married children, John and Vicky.

We learn of the Falkayn domain on Hermes but never see it again after this novel. The universe is changing. David founds the colony on Avalon and, in the next Technic History series story, "Wingless," his son, van Rijn's great-grandson, Nicholas Falkayn, speaks with his son, Nat, on Avalon. Later again, in The People Of The Wind, we encounter another descendant, Tabitha Falkayn, on Avalon. And that is as much as we learn about the Falkayns in the History.
Posted by Paul Shackley at 10:23