Ramble With A Gamblin' Man II 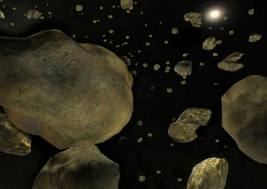 In "Ramble With A Gambling Man" (Tales Of The Flying Mountains, New York, 1984), Poul Anderson shows us an asterite (asteroid-dwelling) business man running a palatial household with several domestic servants, then explains how this archaic-seeming social arrangement might develop.

The earliest asteroid colonists often had to work manually and also had to be both self-reliant and mutually helpful for survival so they developed the idea that the economically successful were morally obliged to employ the less successful and that domestic service was not degrading whereas not to contribute would be.

As usual, the technical/political solution to the problem in the story is neat and occurs to one of the central characters in a moment of inspiration while discussing the problem. In order to cooperate more effectively with the interfering North American government, an asteroid must be moved gyrogravitically to a more accessible orbit. However, as had been carefully explained earlier in the story, asteroids were legally defined by their orbits. Thus, when the asteroid has changed its orbit and thus its legal status, an Asteroid Republican spaceship protected by warcraft, after secret collusion with the magnates of the asteroid, lands and claims sovereignty. Further, the asteroid's population votes overwhelmingly for the Republic. The North American government is diplomatically persuaded to accept a fait accompli.

Finally, moving such a large but terraformed and inhabited object proves that interstellar travel is possible. Thus, two strands of the history, greater independence from Earth and extrasolar colonisation, have been advanced simultaneously but the latter by accident.
Posted by Paul Shackley at 00:14

Email ThisBlogThis!Share to TwitterShare to FacebookShare to Pinterest
Labels: Poul Anderson, Tales of the Flying Mountains