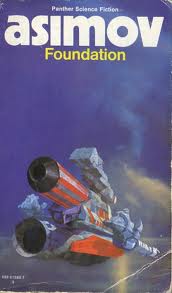 All of these had been published or serialized previously except "The Psychohistorians," which was newly written for Foundation. Hari Seldon, dead but already a historical figure in "The Encyclopedists," is old in "The Psychohistorians" and young(er) in five later written novels, only two by Asimov.

(Similiarly, James Blish's Adolph Haertel is old in "Common Time," a historical figure in several works and young in Welcome To Mars. Blish's Crispin DeFord is dead in Earthman, Come Home but young in A Life For The Stars whereas his character Oberholzer is an experienced Sergeant in "This Earth Of Hours" but a naive Private in "And Some Were Savages" but this last transposition is merely an auctorial joke at a character's expense.)

"The Traders" could have spun off into an indefinite series set in a single period of Foundation history. However, Asimov preferred to progress the history with each new installment, which is the cumulative strength of the series.

In his later written novels, Asimov should have shown us the career of the Imperial mathematician Seldon eventually realizing that the Empire is falling and that he needs to develop a social science to prevent thousands of years of barbarism. Instead, Robot Daneel Olivaw, surviving from the Robot novels, tells Seldon that the Empire is falling and persuades him to try to develop a predictive and practical social science. The mental powers with which Asimov bestowed his Second Foundationers so that they would be able to defeat the mentally powerful Mule did not, as suggested at the time, arise from Seldon's mental science but instead resulted from identifying individuals who already had some initially minor mental powers.

On this blog, I mention Asimov's Foundation series only in order to compare it unfavorably with Poul Anderson's Flandry series: seven stories of different lengths collected in two volumes. All had been published previously and three of them republished as single short volumes before being collected. Flandry is younger in three later written novels and older in another three later written novels.

He is not remembered as a historical figure in later stories of the series although we do learn of the remote consequences of one of his exploits. This is altogether a more plausible scenario.
Posted by Paul Shackley at 18:47

I remember how powerful an impression Asimov's original Foundation stories made in my mind. But, as time passed, I more and more became dissatisfied with them. And more and more came to regard Anderson's Polesotechnic League and Terran Empire stories as far more carefully thought out and convincing.

I recall how disappointed I was the last time I read the Foundation stories, only a few years ago. Some parts, like "The General" should have focused on Bel Riose, not the pointless adventures of a Trader whose name I don't recall.

And almost the only interesting character in the stories was the Mule. I can easily list memorable characters from Anderson: Nicholas van Rijn, Adzel, Manuel Argos, Dominic Flandry, Max Abrams, even Josip III, etc.

And them as well! I merely listed characters I quickly thought of, off the top of my head. Gospodar Bodin Miyatovich, Brechdan Ironrede, Roan Tom, being three more!

Sure and I knew you didn't mean just those characters! But isn't PA amazing? I'm just about to post on his presentation of different perspectives on war.