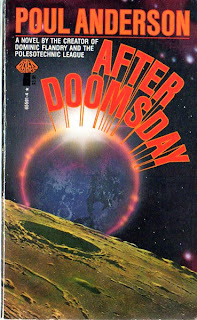 Let us try to summarize the recent history of our immediate civilization-cluster since, in Poul Anderson's After Doomsday (St Albans, 1975), that is the only possible kind of galactic history.

On Kandemir, vast, fertile plains enabled nomads to domesticate animals, to sustain government, literacy and technology and to dominate the cities, where subject races labor in immobile industries like mining. T'sjudan space travelers arrived and began to trade. Kandemirian nomadism became an interstellar empire subordinating even T'sjuda but opposed by a coalition led by the Dragar of Vorlak, a warrior class who had displaced the Vorlakka imperium when space travelers reached Vorlak.

Monwaing which has spread through space by peaceful colonization, not by military aggression, supports the coalition but without joining the war. Other space-traveling races in the civilization-cluster are too weak to intervene. Like the Chereionites in Anderson's History of Technic Civilization, Monwaingi are descended from flightless birds but the latter are more avian in appearance, with beaks and feathers. I am reminded of Tomar Re in the Green Lantern Corps. Monwaingi introduce Terrestrials to space travel, then Earth is destroyed and Kandemir is suspected.

Email ThisBlogThis!Share to TwitterShare to FacebookShare to Pinterest
Labels: After Doomsday, Poul Anderson

Monwaingi might not be as overtly bellicose as humans can be, but they can be as aggressive as hunans--in their own way!