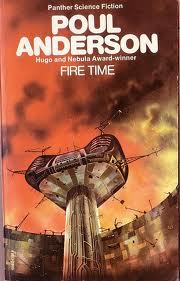 When a novel describes an extrasolar planet visited by Terrestrials, the text must describe both the conditions on the visited planet and the more general background:

What is Earth like in that period in our future?
What means of interstellar travel are used?
Have other extrasolar planets been visited?
Are any of them inhabited?
Do any other races have interstellar travel?
Is such travel regular or are there just occasional exploratory voyages?
Etc.

Poul Anderson's Fire Time (London, 1977) describes the planet Ishtar whose distinguishing feature is that it is periodically scorched by its close approach to a red giant companion star. Such a planet could have existed in any future scenario, whether in one of Anderson's several future history series or in a new scenario specially created for this particular novel. 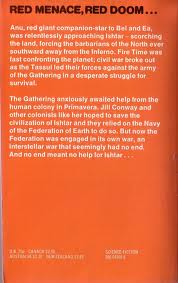 In this case, Anderson combines the new with the familiar. On the one hand, we have never encountered Ishtar before. On the other hand, the Earth that has sent explorers to Ishtar is governed by the World Federation and is currently at war with the Naqsans. That is unfortunate. When we read of this Federation in The Star Fox, a Naqsan was the Chief Engineer for a human privateer that was then at war with another space-travelling species.

In this second novel, Anderson has to describe:

Having previously read Fire Time only once many years ago, I must now reread it carefully in order to find and comment on Anderson's treatment of these questions.
Posted by Paul Shackley at 00:46

Not sure if anyone reads this at this juncture, but I just finished Fire Time and this is my first experience with Poul Anderson! I find it a crying shame that my generation (Late 90s as a teen) hasn't heard of his work. And I'm very glad i found your blog so I know that there's another book in this sequence with The Star Fox. Can't wait to check out. I have a feeling that I'm going to get very into Poul Anderson and will want to follow in his path in my own writing to some degree. http://delarroz.com/?p=610 is my review of Fire Time as a first time reader.

Jon,
Thank you for your comment. I am glad that my blog has been of help.
Paul.

I'm so excited to read more (as I get time). Don't want to spoil anything. What do you think his next best work is after I finish up with The Star Fox?

Jon,
My most-reread favorite is the Time Patrol series.
Paul.

I'm glad to see a new kid on the block! And of course I rejoice that you have discovered the works of Poul Anderson. I envy the years of pleasure you will get from reading Anderson books for the FIRST time.

I agree! The works of Anderson have fallen into totally unjustified obscurity! I first came across Dr. Shackley's blog while trying to find someone, ANYONE, willing to talk about the books of Anderson more than just occasionally and briefly.

Besides the books suggested by Paul, I would also recommend the stories about the Hokas co-authored with Gordon R. Dickson. Because these tales were meant to be humorous. Anderson's THE MAKE SHIFT ROCKET was also a laugh riot for me when I first read it.