Continuing With The Star Fox II 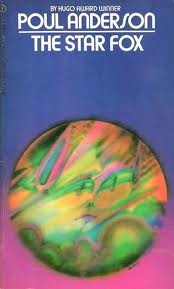 (i) Anderson approved of private enterprise and was interested in war so maybe "Privateers...privately owned warships..." were a perfect subject matter for him? (The Star Fox (London, 1968), p. 34) Nicholas van Rijn is an interstellar trader. Gunnar Heim becomes an interstellar privateer.

(ii) Only France backs the privateer. Was Anderson rehabilitating the French in the eyes of (some of) his countrymen? (An (older) Englishman informed me that "the French are cowards," citing an instance during WWII when French forces retreated instead of advancing in support of their allies. I am glad I don't think like that.)

(iv) Having given us two intelligent flying species in his Technic History, Anderson gives us another here and again his characters discuss how flight is scientifically possible for such large creatures. Their body structure and planetary atmosphere differ from ours, e.g., there is more hydrogen.

(v) Like Anderson's Ythrians, the flying Staurni are entirely carnivorous. Usually carnivores specialize in fighting ability, not in intelligence, but the Staurni may have developed intelligence to resist similar but larger opponents.

(vi) "Underfoot the ground was covered with that springy mosslike red-yellow growth that was this world's equivalent of grass." (p. 97) Anderson always tells us what a new planet uses for grass. Later there is a reference to the grasses of the colonized planet, New Europe.

(vii) Anderson always shows us political arguments and some of their absurdities like, "'We make no threats. But let the militarists beware.' " (p. 44)