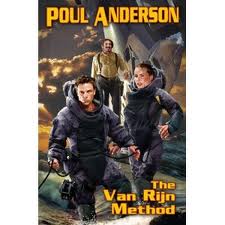 This has become an obsession of mine that it is probably of little or no interest to anyone else. Some (many?) blog viewers might prefer to skip this post? - but I take the opportunity to write whatever I think about Anderson's works rather than always what I think may be read.

I have thought of yet another way to present Poul Anderson's Technic History, this time in short boxed "trilogies" that would divide the series into manageable units, making it easier for readers to keep track of the contents of the individual works and of the successive periods of the fictitious history.

This involves splitting up previously recognized divisions, e.g., what I call the "Children of Empire" trilogy. On the other hand, an unexpected "Chives trilogy" emerges from this new arrangement. Also, readers would sometimes have to be advised to read a novel between some of the stories of a collection.

Trilogy I
Wings Of Victory, a collection: "The Saturn Game"; "Wings of Victory"; "The Problem of Pain"; "How To Be Ethnic In One Easy Lesson."
Margin Of Profit, a collection: "Margin of Profit"; "The Three-Cornered Wheel"; "A Sun Invisible"; "Season of Forgiveness"; "A Little Knowledge."
The Man Who Counts.

Trilogy III
Mirkheim.
Avalon And Empire, a collection: "Wingless"; "Rescue on Avalon"; "The Star Plunderer"; "Sargasso of Lost Starships."
The People Of The Wind.

Trilogy V
Outposts Of Empire: "Outpost of Empire"; The Day Of Their Return.
Tiger By The Tail: "Tiger By The Tail"; "Honorable Enemies"; "The Game of Glory."
Mayday Orbit: "A Message in Secret"; "The Plague of Masters."

Trilogy VI
Hunters Of The Sky Cave: "Hunters of the Sky Cave"; "The Warriors from Nowhere."
A Knight Of Ghosts And Shadows.
A Stone In Heaven.

Trilogy VII
The Game Of Empire.
Long Night And Dawn: "A Tragedy of Errors"; "The Sharing of Flesh"; "Starfog."
The Night Face.