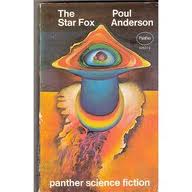 Poul Anderson's The Star Fox and Fire Time are not quite a future history but they are a futuristic sf series with three installments in the first volume and a single novel as the second. What would be an appropriate overall title for the two volumes considered as a unit?

They are not a Gunnar Heim series because Heim, although the hero of the first volume, merely cameos in the second. FTL in both works is based on the theory of a man called Mach but, unlike James Blish's theoretical genius, Adolph Haertel, Mach does not appear and is barely mentioned so this is not a "Mach series."

Not Fire Fox. Star Time? The latter suggestion combines the two most significant words used in sf titles. An Anderson collection is called Time And Stars and one of Robert Heinlein's Scribner Juveniles is called Time For The Stars.

I have just finished rereading Fire Time (London, 1977). Just as Guion, the guardian of the history of the Time Patrol, appears only in the brief introductory or intermediate sections of The Shield Of Time, Tribunal president Daniel Espina appears only in the Foreword and Afterword of Fire Time. He is one of Anderson's canny statesman characters. The point of The Star Fox is that some wars are necessary to prevent continued aggression whereas one point of Fire Time is that other wars can be, as Espina says:

Here is one freaky detail. At Espina's house:

"The door opened to show an attendant, live and nonhuman." (p. 7)

This abrupt appearance of a nonhuman being is one of the details that quickly establishes, on the first page of the text, that we are reading a futuristic science fiction novel. There have already been references to a vehicle called a flyer, to a guardian satellite and to Earth as "...man's mother planet..." (p. 7)

The nonhuman attendant, having been introduced, is twice referred to as "...the being..." but not described (pp. 7,8). What does it look like? Is it even humanoid? (Three species of non-humanoid extraterrestrials occur later in the novel.)

We barely notice because our attention is focused on what is happening to the human characters. But mentioning a nonhuman being and leaving it undescribed can be a technique in horror fiction: let the reader imagine the worst. If Fire Time were to be adapted into a visual medium, then something would have to be done about the appearance of this "being" - and the director or author would have complete freedom since Anderson gives them nothing to work on.
Posted by Paul Shackley at 00:22