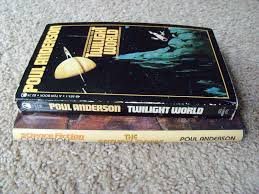 (What is the book beneath?)

Taylor, Oregon, the capital city of the North America Union, has made remarkable advances during the mere twenty nine years since World War III:

on a mountainside above the city, a cluster of large buildings with curving lines, flat planes, enormous windows and smooth, pastel, plastic fronts;

a lot of gadgets in a private home, including a color television, a visiplate and a chair that molds itself to the body (see Futuristic Furniture);

moving murals in a tavern;

a tall capitol building with many columned tiers in its own parks and gardens;

inside the building, an automatic elevator and door and a clear plastic wall overlooking city and mountains;

the President and his cabinet remind me of the UN in the Psychotechnic History, rulers of a high tech society in the wake of a nuclear war - another example of this is Judge Dredd and his colleagues.

I suspect that many of the advances are due to the genius of Alaric Wayne but will have to continue rereading to confirm this.
Posted by paulshackley2017@gmail.com at 07:33

Given determination and modern technology, rebuilding and recovery is possible. So I'm not too startled by how much Taylor has changed in 29 years.

I assume a visiplate is something like a telephone with a miniature two way TV. A "videophone."

And in the 1950's an automatic elevator would seem VERY futuristic. I can still remember how, in my own boyhood, there were still elevators with human operators taking people up or down.

I remember this meeting of the President and his cabinet. There was concern about a possible ecological collapse making Earth uninhabitable.

And Alaric Wayne was treated with great deference by these sometimes hard, grim men.

Your question which of Anderson's books is beneath that copy of TWILIGHT WORLD has been niggling at me! I even used a magnifying glass while trying to make out the title, but no luck. At first, I thought it was THE STAR FOX, but the title is too long for that.

Sean,
Thank you for trying.
Anyone else?
Paul.

Paul and Sean:
I tried saving the image to my machine, then using a photo-editing program to enlarge it, but I, too, couldn't get good enough resolution to make the words out. It looks as if the first letter after "The" is an "S." What comes after that, though ... it appeared to me like "P" followed by "R," but there's no Anderson title I found that matches the sequence "SPR" for the beginning of the first word. And for that matter, I'm not certain about that "S"; it might be a smudge rather than an actual letter. It seems blurrier than any of the letters following.

Maybe, if it does begin with "S," it could be The Snows of Ganymede, in which case my eyes were deceiving me about the supposed "PR."

If that "S" isn't really a letter, though, it occurs to me that instead of "PR," it might be "BR." The next letter after that could be an "O," and the following letter is open at the top and might be a "K." The problem is that the last several letters don't look at all (to me, anyway) like "SWORD." I tried looking at cover art for varying editions of The Broken Sword, to see if any resembled what little we can make out of the cover of the mystery book, but I didn't find anything that I'd say even came close.

I must regretfully report that I've drawn a blank on this one.

David: you did a lot! I looked over my collection of Anderson books to see if I had any looking like the one in the image, but no luck. I did wonder if the title was THE CORRIDORS OF TIME. The first word after "The" looks vaguely like "CORRIDORS," I thought. But I can't be sure.

Paul: I enjoy these little teasers you sometimes ask us!

Gentlemen,
The top of the spine says "Science Fiction Collection" so are we wrong to be looking for a novel title?
Paul.

I somewhat belatedly noticed that, as well! So this Anderson book is a collection of some of his short works. I'll be trying again to puzzle out the title!

Sean,
Either a collection or a volume in a series of sf works that the publisher called "Science Fiction Collection."
If the former, we know that there were many collections with overlapping contents and we might not know all the titles.
Paul.

I agree with both possibilities. And the "look" of what I can make out of the jacket cover reminded me of the mid 1960's copies of THE STAR FOX and THE CORRIDORS OF TIME which I have. But none of my Anderson books have "Science Fiction Collection" on the spine as seen in the image you chose.