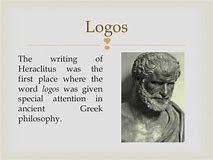 Get this. Heraclitean philosophy was a precursor not only of Hegelian and Marxist dialectics but also of John's Gospel.

World lines are the opposite of flux. They are conceived as static. I forgot to mention that, in the first conversation between Manse Everard and Wanda Tamberly in The Shield Of Time, Part Two, it is Wanda who compares world lines to a mesh of tough rubber bands which spring back to their proper configuration if they are pulled on but is this accurate? I thought that world lines merely existed in four dimensions, not that they were subjected to any pulling or springing back. She also calls them "'...our tracks through space-time.'" (p. 31) If this suggests that we are entities that move along a track or that move through space-time leaving a track behind us, then it is wrong. Each of us is his world line extending from his birth to his death. It is a mistake to think that each individual is an immaterial consciousness moving along his world line. We have discussed this concept as it appears in HG Wells' The Time Machine and in James Blish's The Quincunx Of Time - and we are running out of time for blogging here and now!
Posted by paulshackley2017@gmail.com at 22:54

And I do believe all human beings are also immaterial consciousnesses and souls both inhabiting and animating our bodies. And that this applies as well to rational being inhabiting other planets. I simply don't believe mankind to be the ONLY such intelligent species in the entire cosmos!

Sean,
But, even if there is a soul, I do not think that it moves along a world line, successively observing three dimensional cross-sections of the continuum.
Paul.