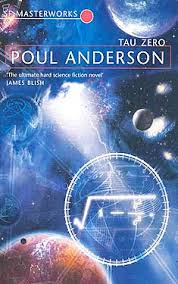 Poul Anderson combines creative imagination with intellectual rigor. From an early age, I wanted to read about imaginary universes, e.g., Norse mythology, and to reason about the real universe, e.g., why does it exist? However, my approach was philosophical, not scientific. Like Socrates, I preferred abstraction to empiricism. Despite this cloistered approach, it is empirical scientists that have changed the world. Pure reason was only one part of The Birth Of Science.

fantasy, e.g., about Odin and the Nine Worlds;
hard sf, e.g., about time dilation and a cyclical cosmos;
syntheses, e.g. -

in "The Saturn Game," characters in a hard sf setting become lost in a fantasy role play;

"Star of the Sea" follows historical events and mythological developments with sf provided by time travel.

Anderson's vast canon exists within an immense literary framework. On this blog, we have referred, among many others, to Homer, Plato, Shakespeare and Edgar Rice Burroughs - epic, myth, philosophy, drama and pulp fiction.
Posted by paulshackley2017@gmail.com at 14:29