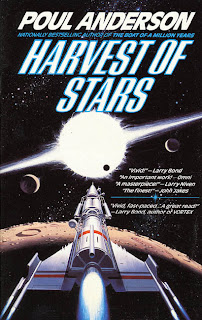 Anson Guthrie, the central character of Poul Anderson's Harvest Of Stars Tetralogy, is a unique personality with a few partial resemblances to other sf characters.

(i) Like DD Harriman, the central character of Robert Anson Heinlein's The Man Who Sold The Moon, he funds space travel.

(ii) Like Nicholas van Rijn, the title character of Anderson's The Man Who Counts and Trader To The Stars, he runs a space-faring company, has a relationship of personal loyalty with his employees, wants profits, freedom, elbow-room and no truck with government and comes into conflict with bureaucrats.

(iii) Like Christian Brannock in Anderson's Genesis, he copies his personality onto an AI which lasts indefinitely after his death.

(iv) Like the Constitutionalists in Anderson's Orbit Unlimited, he emigrates at sublight speed to an extrasolar colony because he dislikes the political regime on Earth.

(v) A second reason for emigration is that, like the mutant immortals in Anderson's The Boat Of A Million Years, he dislikes the prospect of AI superseding humanity in the Solar System.

(a) Avantism, a rightly resisted repressive regime in North America, is overthrown by the combined efforts of Chaotic revolutionaries, Selenarchs and Guthrie's Fireball outfit. Space technology is a weapon: large rocks can be dropped from orbit and a torchship can scorch the surface of the Earth.

(b) The World Federation imposes order in the Solar System after the overthrow of Avantism.

(c) AI starts in the Federation.

Further posts will have to address (b) and (c).
Posted by Paul Shackley at 02:33