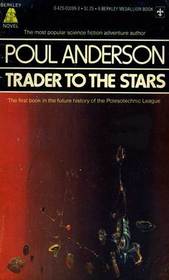 I now accept that Poul Anderson's History of Technic Civilization should be published in seven omnibus volumes but there is still room for disagreement about which works should be in which volume and what the titles should be. I now suggest: 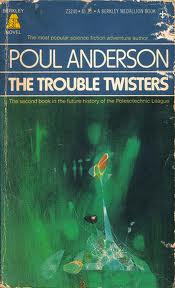 Readers of the Flandry series know that he fears a future period called "the Long Night." The proposed title for Vol VII would convey both that this period does come and that it is not the end. In this version, every volume except Vol VII contains either three or a multiple of three works. The richness and dynamism of the series mean that it is possible to keep rethinking how best to present it. The current Baen Books Technic Civilization Saga is a good start.
Posted by Paul Shackley at 23:36

It is no good. Every time I think I have defined how the History should be collected, I haven't. But it is a good way of rethinking the contents of the series. I now suspect that STAR TRADERS would be too long and and should redivide into STAR TRADER (van Rijn) and TRADER TEAM (van Rijn's team led by Falkayn). Provided that no other changes were necessary, this would give the "League and After" and "Empire and After" periods four omnibus volumes each.

I have been doing a rough page count of various sections of Baen vols I and II and realise that my way of dividing up the series does not correspond to reasonable numbers of pages for uniform volumes.

Which means that maybe Baen Books/Hank Davis really did divide up the Technic Civilization stories into different volume as sensibly as possible. Aside, of course from minor things like the not quite satisfactory FLANDRY'S LEGACY as the title of the last volume.

Baen vol V (Captain Flandry) is much shorter than vols I and II so could have been longer and, I think, corresponded to my proposed FLANDRY AND EMPIRE.

Hmmmm, and how would you advocate dividing into volumes the Technic stories in a hypothetical COLLECTED COMPLETE WORKS OF POUL ANDERSON? Maybe the four post Imperial stories would not be quite enough to justify them having a volume of their own in such an edition? Perhaps A STONE IN HEAVEN, THE GAME OF EMPIRE, and the post Imperial stories would do as a separate volume for a COLLECTED COMPLETE WORKS?